After three years of planning it finally came the weekend for the Fruit n Veg 2nd World Rogaining Championships.

Nearly 700 people entered the Rogaine and dispite blisters and sore feet I think that everyone enjoyed the Everlasting Rogaine. The weather was good for Rogaining with clear skys for most of the night and maximum day time temperatures around 20 deg C. Even a shower just after the start did not dampen the enthausiasm too much. 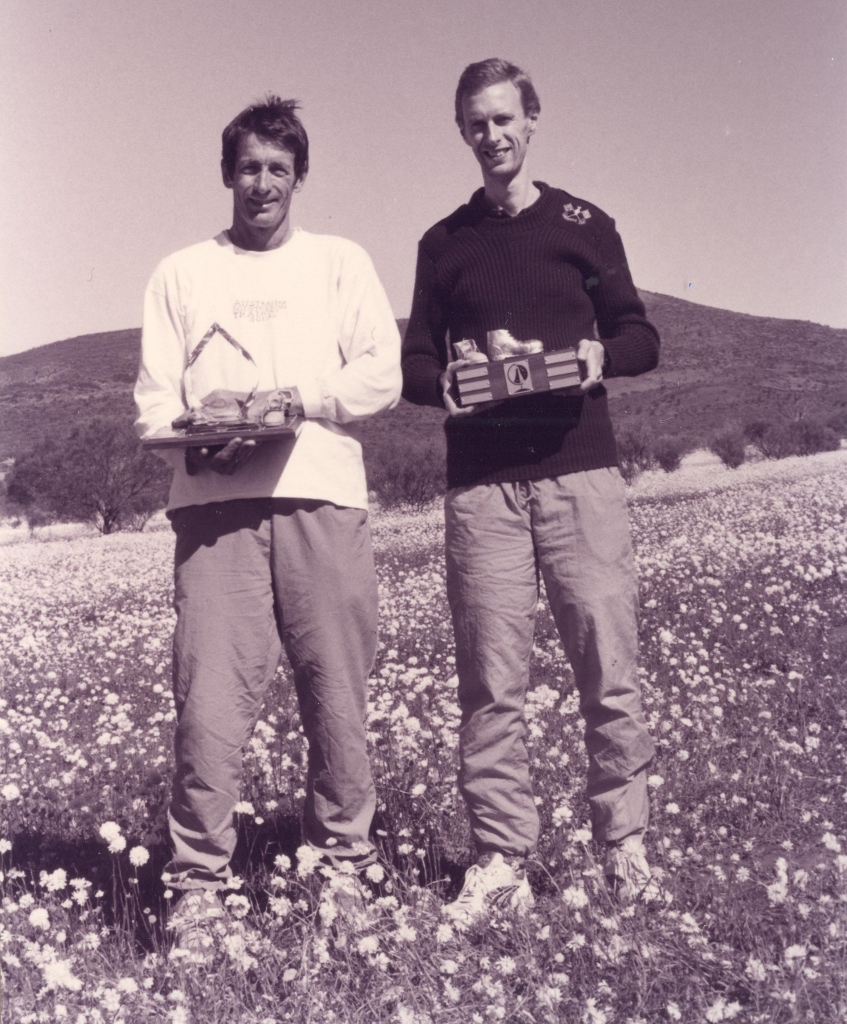 The rain over the weeks leading up to the event was enough to cause the tracks to the planned Hash House site to be too soft to get all the vehicles in, so the Hash House was moved some eight kilometres NW. This, for the top teams, made the route planning more difficult than with the original Hash House site. For the more recreational teams, the planned concentration of controls close to the Hash House were no longer available and the scores were low.

Nearly half the teams set off, through the carpet of wildflowers that surrounded the Hash House, to climb directly up Mt. Singleton, 350m above the start. A heavy shower of rain made the steep rocks slippery and the views were all lost in the mist.

Many teams regreted this choice as they used too much energy climbing to the summit and the rugged slopes that were crossed to descend to the controls on the far side were slow going.

Later in the night there were three hours between sunset and moon rise and quite a few teams found themselves in difficult terrain and decided to make the long walk back the the Hash House for very few points. The teams that had missed Mt. Singleton at the begining of the course were able to reach some of the easier controls at the SW end of the map as the darkness arrived.

When dawn arrived most of the fancied teams were still out on the course. There was little opportunity for teams to plan a competitive route that included a stop at the Hash House. At the finish only a couple of teams were late but many of the best arrived within the last ten minutes.

The section place getters and the top ten teams were:

Many thank you messages are needed to congratulate all the efforts that went to make the event a success and I would particularly like to record my thanks to:

The station owners Don and Leah Bell who helped from the very first visit to the station when they drove me around and proudly showed off their home, to the event days when they drove out on motorbikes to parts of the map that we could not reach to help put out controls and water drops.

The sponsors, Healthway, Wilderness Equipment and ARA who provide financial support for the event keeping the costs down to normal rogaine levels when the expenses were higher than normal.

The donors of spot prizes; Wilderness Equipment, MacPac, Big Country and Ultimate Direction. The tremendous support of these outdoor manufacturers and shops was much appreciated by the lucky winners.

Of the many people in WARA that put in many hours to make it all work so well I would like to highlight:

Also many thanks to all the other people who worked on Admin and Hash House over the weekend as well as the Dunny Diggers, Control Collectors, Truck Loaders and general clearing up that everyone lent a hand with.

Last but not least the rogainers - who came and said nice things at the end when they were tired and really were not sure after 24 hours of stumbling over rocks, fighting off the wild emus, getting stuck in endless spider's webs and marvelling at the display of wildflowers if rogaining really is FUN.

Yes it is - see you in Kamloops
Richard Matthews, Organiser